Home / Trending / Let's Get 'Higher' with the 'Ultimate DJ'

Let’s Get ‘Higher’ with the ‘Ultimate DJ’

Making headlines this week, news of famed American Idol judge and X-Factor Creator, Simon Cowell, is slated to begin production of a DJ-themed competition series. The former American Idol judge/music critic will collaborate with SFX Chief Executive—Robert Sillerman—and T-Mobile, bringing Electronic Dance Music Producers together in competition. Reportedly, producers will submit original tracks and mixes through social media websites, such as YouTube, as auditions for the show. Once the artists are selected, the show will commence with live performances in SFX-sponsored events, initiating the final stages of the competition. The show is set to be named “Ultimate DJ,” and is the concept of Cowell, himself. He has seen the immense growth that quickly developed within the EDM Scene, and wants in. Through his production company—Syco Entertainment—Cowell has formulated a proposal that profoundly integrates EDM into Popular Culture. It is greatly debated whether that is something to be pleased about, but if it will be one thing, it will be controversial.

There are defining characteristics of Cowell that we look for in other television-competition judges, but are often unparalleled from his inimitability. Whether it is the British accent, brutal honesty of an artist’s performance, or the combination, millions of viewers tune-in to the featured programs in anticipation of his spectacled reactions. Although he does not specialize in critiquing the genre of Electronic Dance Music, he is a music critic that appreciates sound, in all of its waveforms and beats per minute. If he were to take the seat as a panel judge, he could provide a perspective that is respected within the music industry, but is also relayed in an honest hilarity that attracts consumer attention. Perhaps, he shares similarities to EDM Producers: Deadmau5 and Kaskade, who are notorious for publicly critiquing the genre’s artists and consumers. The inception of “Ultimate DJ” will unquestionably irritate the outspoken artists, given their overt discontent of EDMs ‘selling-out into commercialism.’

While, in a sense, it would be considered commercializing, “Ultimate DJ” has the potential to augment the media’s negative coverage of The Scene. Given Simon Cowell’s sponsorship, the Electronic Music Culture would be re-evaluated, contesting the disparaging exposure that has turned to stereotype. Yes, it will likely attract an audience that has never-before been associated with Electronic Music, but who knew “Animals” would become the new “Electric Slide” in many wedding-playlists? 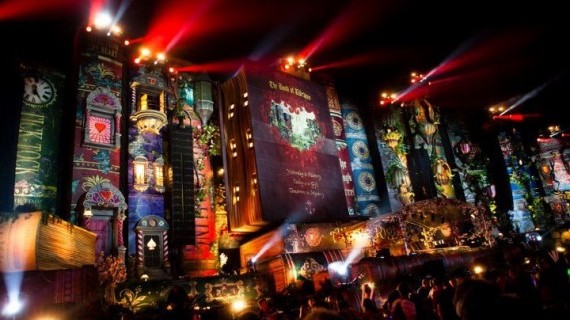 For those ragers still unsure about accepting the new program, SFX Entertainment’s partnership should quell many of your concerns. Responsible as the leading contributor to the World’s Electronic Music Culture, SFX generates festivals such as: Tomorrowland, TomorrowWorld, Mysteryland, Electric Zoo, Life in Color, and Decibel; let’s not forget about their proprietorship of the essential online resource for Electronic Music—Beatport. As the EDM Industry’s value increases to figures exceeding $4.5 Billion, SFX is credited for yielding many of those billions. With their background in mind, it is unlikely they would sponsor a production that would bring anything other than success.

Contrastingly, Simon Cowell is not the only architect looking to bridge the gap of EDM and Popular Culture. Hip-Hop impresario—Jay Z—alongside actor/producer/rapper—Will Smith—are rumored to be joining Calvin Harris and HBO, in production of an Electronic Dance Music-themed comedy series. If the contributors could not get any better, Trainspotting author/director, Irvine Welsh, will transcribe the 30-minute episodic series. Seen from the above “Ultimate DJ,” “Higher” (the show’s expected title), is amidst both positive, and negative criticism. Separate from The Scene’s opinion of Pop Culture’s mainstream integration, there is concern of a potentially destructive involvement of the Hip-Hop icons. Lacking background in many nuances that lie within the EDM Culture, critics of the proposed show believe there is a lot of room for interference from the series’ production company owners. As Jay Z and Smith will be signing the checks, there is meddling potential that could detract from the successful reach (in regard to popularity, rather than financial) of the program.

Ideally, from an EDM centralized perspective, Jay Z and Smith must entrust “Higher” to the proper sculptors—Harris and Welsh—to guarantee success. Electronic Music is a multi-billion Dollar industry, powerful enough to financially support the HBO series if acceptance of those outside The Scene lacks.

Calvin Harris is currently one of the highest paid producers in the world; along with Welsh’s powerful storytelling abilities, there is a higher expectation for EDM approval. The show is expected to comically satirize many aspects of the EDM Culture, potentially incorporating themes of: egotistical DJs, button pushing/knob twisting, pre-recording, drug-filled festivals, and many other controversial subjects that we look forward to—self-reflectively—make us laugh. Perhaps, Jay Z’s friendship with Kanye West will be included in the show, as we can always use a laugh at Yeezus’ latest tricks. There has been no rumor of the show’s production date; but once it is released, you can expect an increase in talk amongst mainstream media outlets.